BUMBULI: We Have Made A History Once Again 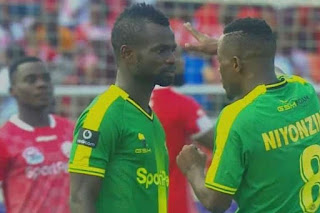 After a winning game against Simba, Young Africans Sports Club’ spokesman Hassan Bumbuli said they have written a history in front of the president John Magufuli.
Bumbuli said their win of 1-0 against Simba SC, made them to write a history once again in front of the president John Magufuli, CAF president Ahmad Ahmad and thousands of football fans.
“We have written a history yesterday in front of the President Magufuli, it’s a record that Simba Sports Club will never change in football life” Bumbuli said.
Bumbuli added that they went to the squad as history makers where by in 101 games, they won 37 games against Simba who won 28 games.
In the derby yesterday attended by 59,325 fans at the national stadium according to Bumbuli, Young Africans surprised their fans after scoring a goal in the 44 minutes in the first half through their mid fielder Bernard Morrison.
On the other hand, Simba’s spokesman Haji Manara has written on his Instagram account that Young Africans were best than them as they won the derby yesterday.
Manara who is at Spain  wrote “My fellow Simba fans, let me give you a short greeting, we have lost the derby by the club that played better than us and we have to accept that can never change, I know that we have pains but that is football, let us focus for the next game”
Regardless of the result, Simba still rests top of the organization table with 68 factors from 27 matches, while Yanga relocated to 3rd on 50 factors from 25 trips. Azam FC are 2nd on 51 factors from 27 suits game.