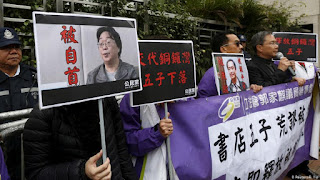 A Chinese court sentenced Swedish citizen Gui Minhai to 10 years in jail for illegally providing intelligence abroad, according to a statement by the Ningbo Intermediate People’s Court published on Tuesday.
Gui was one of five booksellers from Hong Kong who were detained for selling books critical of China’s political leadership.
He was arrested in early 2018 by Chinese authorities while traveling with Swedish diplomats in mainland China.
The court also sentenced Gui to five years of “deprivation of political rights,” meaning he cannot lead state-owned enterprises or hold positions in state organs.
The Chinese court has also withdrawn the Swedish book publisher’s political rights for five years.
The German government and the EU have both condemned his arrest and urged Chinese authorities to release him.