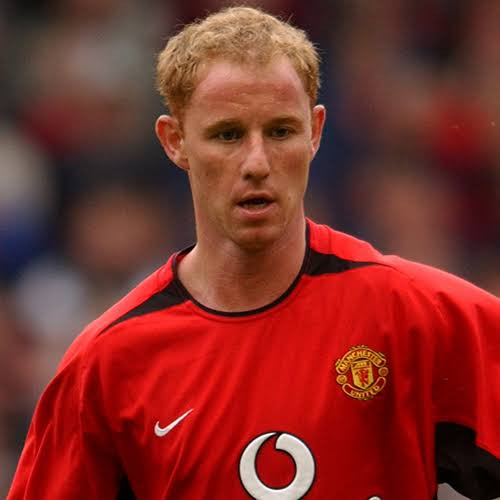 Manchester united and England football legend Nicky Butt, 44, has denied assaulting his wife of 11 years, Shelly Butt and damaging her 800 pounds iphone during a fight at their 4million pounds home earlier this year.

The ex midfielder- who was part of the famed ‘class of 92′ teenage Manchester team that included David Beckham, Paul Scholes, Gary and Phil Neville-, today appeared at Manchester Magistrates’ Court where he denied assault by beating and criminal damage.

Butt, had lived with Shelly in the village of Hale, Greater Manchester, and coaches United’s Academy. He had been arrested in June following the alleged incident which occurred at 2pm on April 16.
The court case which held today has been adjourned after Nicky Butt claimed the phone was ‘thrust’ into his face during the row and he accidentally knocked it out of Shelly’s hand.
Butt will face a two day trial at the magistrates’ court in February and the maximum sentence for common assault is six months imprisonment.
Prosecutor Joanne Cronshaw speaking to press on Wednesday  said: ‘There are a number of witnesses and the trial will take at least a day and a half to two days. There was scratch to the hand caused within the incident relating to the first charge.’
Defence lawyer Lisa Roberts speaking about Nicky Butt said; ‘He has no previous convictions and is of good character.
‘He strenuously denies these allegations and it is important these issues are heard. This will go into a two day and Mr Butt will give evidence.
‘There is issue as to fact and character evidence as well.