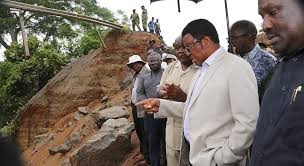 While inspecting the maintenance of  Kiyegeya bridge in Morogoro, Prime Minister Hon. Kassim Majaliwa found out that the transferred Morogoro Regional Manager of Tanzania National Roads Agency (TANROADS) is still working.
Godwin Andalwisye was busy rebuilding Kiyegeya Bridge on the Morogoro Region which was recently swept away by floods.
During his inspection tour of the site last week, the Prime Minister ordered the manager to be transferred to the headquarters of the Ministry of Transport and Communication for failing to undertake regular checks and maintenance of the road.
He also directed that another manager should be appointed immediately to take over and supervise the reconstruction of the key infrastructure. So the prime minister questioned why Andalwisye was still there.
“The decision made to transfer Godwin Andalwisye was right because he could not supervise others. The budget for inspection and maintenance of roads was there but he did nothing” the statement quoted Majaliwa as affirmed.
In his response, TANROADS Chief Executive officer Patrick Mfugale said that Andalwisye is one of the few engineers with specialization in bridge construction hence his services were still needed in the ongoing work.
“You issued a directive that he should be transferred; I am the one to do that. We are still using his expertise” said Mfugale.