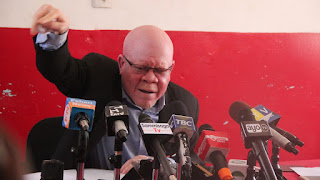 Towards Dar es Salaam derby, Simba Sports Club’s Head of Communications,Haji Manara told the fans to appear and fill the stadium as usual.
According to Manara some people said doing a promotion towards the derby will promote Young African football club to get more income if Simba fans will fill the stadium.
Manara said his statement to shut their mouths does not mean that it is a way to avoid  publicizing Yanga but he meant to leave them talk until the derby day’s result.
“Simba will not be affected by the income; the priority of the club is not an income we are far now in issues of income, we have big investment that does not affected by other team’s earnings, let us buy tickets as many as possible, our priority is to get three points and not income, let us appear in the stadium as usual” said Manara.
He added that he has talked with the team captain John Boko who said their fans presence in the national stadium will motivate them to win.
According to Manara, captain Boko has assured him the team to win in their match and he pardoned the fans for the result in the first match of the first round.
In the derby on 8th March 2020, Simba Sports Club will be the away team while Young African football club will be the home team.