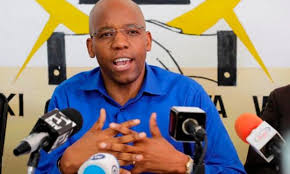 The National Convention for Construction and Reform (NCCR– Mageuzi) party has told that Tanzania cannot be transformed to mono party system.
Speaking to journalists, the chairman Mr. James Mbatia issued the remarks that Tanzania has already documented in its constitution as a democratic country that will follow multiparty system and it is impossible to change the system.
Further, Mbatia said Tanzanians should not be discouraged and worried about the country to transform to mono party system.
“We have to influence our fellow Tanzanians that they should not be discouraged by those who think that Tanzania will turn to mono party system” Mbatia said.
Mbatia added that “if the ruling party (CCM) thinks and have a dream about turning the country to mono party system, it is impossible.”
On the other hand Mbatia told his members all over the country to have unity and humanity that will help them to win the general election that will be held this year.
“The ideology of humanity should be practiced practically and this will bring us to be winners of the general election this year” Mbatia emphasized.