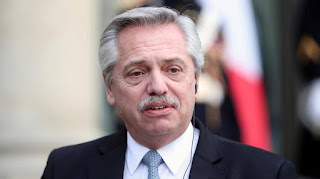 Argentina’s President Alberto Fernández has said he will send a bill to legalize abortion to Congress within the next 10 days.
Mr Fernández, who was sworn in as president in December , has previously described abortion as “a matter of public health”.
In Argentina, abortion is allowed only in cases of rape, or if the mother’s health is in danger.
It is largely prohibited across Latin America, except in restricted cases.
If the bill is passed, Argentina will become the largest country in the region to legalize abortion.
“Abortion happens, it’s a fact,” the president said in his first annual address to Congress.
“A state should protect citizens in general and women in particular. And in the 21st Century, every society needs to respect the individual choice of its members to decide freely about their bodies.”
Mr Fernández also promised to introduce a program to improve sex education.
previous attempt to change the law in Argentina, where the population is overwhelmingly Roman Catholic, failed.
In 2018, a bill to legalize abortion within the first 14 weeks of pregnancy was narrowly approved by Congress, but was later rejected by the country’s Senate.
Unlike last time, however, the country’s president is behind the bill.