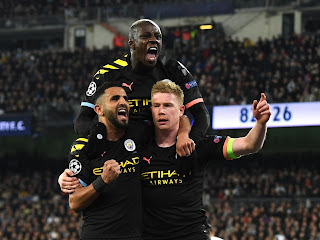 Manchester City produced a stunning late fightback as goals from Gabriel Jesus and Kevin de Bruyne secured a memorable 2-1 win at Real Madrid to take control of their Champions League last-16 tie.
After a cagey first half, the hosts capitalized on a defensive mix-up between Rodri and Nicolas Otamendi to take the lead as the impressive Vinicius Junior raced towards goal before neatly squaring for Isco to slot home.
Sergio Ramos shot over as Real Madrid looked to double their advantage but City equalized 12 minutes before time when Jesus nodded in from close range.
It was the first time City had beaten Real Madrid in the Champions League and means they are in the driving seat before the second leg at the Etihad on Tuesday, 17 March.
The win will have been all the more welcome for City fans after their side were earlier this month banned from European club competitions for the next two years.
Real Madrid are the Champions League’s most successful club with 13 titles and they have been particularly strong under Zidane.
This was the first time Guardiola and Zidane – rivals in their playing days for Barcelona and Real Madrid respectively – had gone to head-to-head as managers and it was the former who came out on top.
The defender was making only his fourth appearance since recovering from a serious knee injury that had kept him out for much of the season but pulled up with just over half an hour gone and was replaced by Fernandinho.
Laporte was able to make his own way off the pitch, giving City reason to be optimistic that his absence will not be a long one.
Manchester City boss Pep Guardiola to said “We tried to come here to win the game and we did. This is just the first part. If one team can overcome this situation, it’s this club.
Manchester City will now switch their attention to the Carabao Cup final as they take on Aston Villa at Wembley on Sunday, 1 March (16:30 GMT).