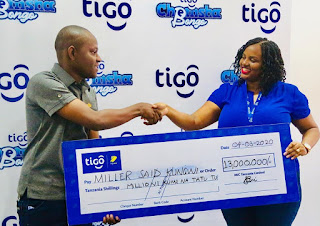 Tigo promotion “CHEMSHA BONGO” That lasted for three months has continued to  give money to  winners who succeeded in answering the questions accordingly.
Head of Digitital Department in Dar es Salaam Ikunda Ngowi,Speaking with Media today in Dar es Salaam said they handled over sum of 13 million shillings to Miller Said Kungwi  after he emerged as a winner of the promotion
“We have great joy to hand over this money to our winner.We thank our customers all over the country who participated in this three month promotion that has now ended” Said Ikunda Ngowi.