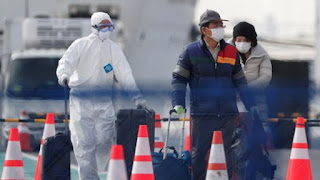 Two Japanese passengers who contracted the Covid-19 virus on board a cruise ship quarantined in Japan have died.
One passenger died from Covid-19, while the other died from pneumonia, said local reports. Both were in their 80s and had underlying health conditions.
They had already been taken off the Diamond Princess last week and were being treated in hospitals.
At least 621 people on the ship tested positive for the virus, the biggest cluster outside mainland China.
Japan’s Health Minister said both passengers were sent to medical facilities when they showed symptoms.
“I believe they received the best possible treatment”, said Health Minister Katsunobu Kato in an AFP report.
The Diamond Princess was carrying 3,700 people in total and passengers who tested negative for the virus began leaving the ship on Wednesday after 14 days quarantine.
Hundreds have now disembarked from the cruise while others are set to leave over the next two days.